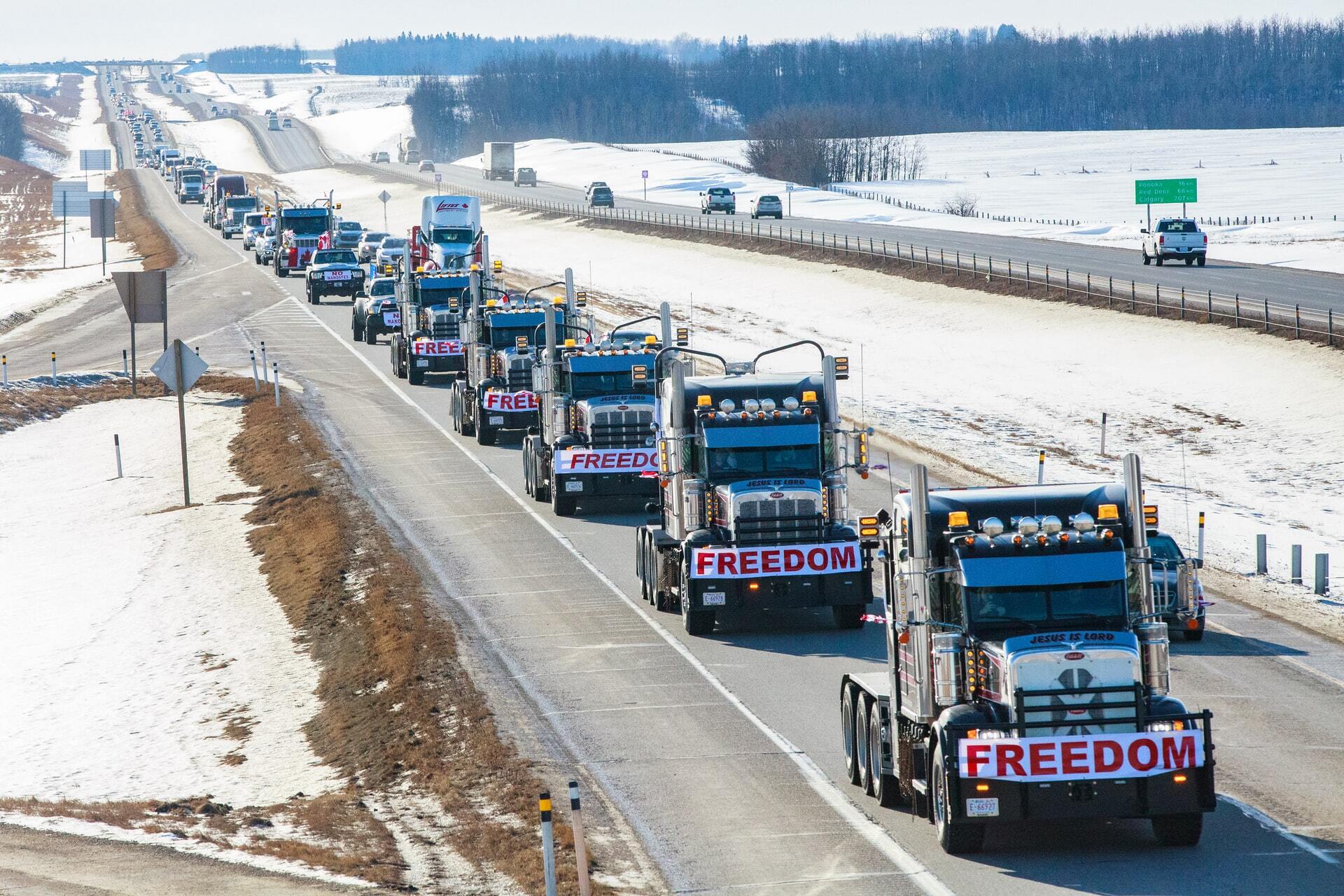 Since mid-January 2022, Canada has witnessed a trail of fervent protests. The so-called "Freedom Convoy", mainly made up of truck drivers, quickly turned into demonstrations that also involved the rest of the Canadian citizenry, affecting the capital Ottawa. The largest and noisiest convoy was launched on January 29, descending on the capital with the insistent sound of horns and clogging the city's traffic, and even interrupting the traffic around the Ottawa International Airport during the first week of February, surrounding the arrival and departure terminals.

The movement gained momentum after the Canadian government introduced a vaccination mandate in mid-January that would require truckers to undergo mandatory Covid-19 vaccination treatment in order to cross the U.S. border in the course of their work, or to undergo a two-week quarantine upon their return. For this reason, the "Convoy of Freedom" was soon joined by elements of the citizenry opposed to the anti-Covid measures in force in the country, such as mandatory masks, lockdowns and restrictions on gatherings. Prior to the new mandate, truckers were exempt from vaccination requirements and allowed to cross the border - by taking Covid tests - even during the 18-month period when the border was closed to non-essential traffic. Truckers, in fact, were considered vital to keeping major supply chains running.

The Canadian Trucking Alliance, the leading advocacy group for Canadian truckers, stood up to the protests and said that more than 85 percent of Canadian truckers who regularly cross the border had been fully vaccinated by the end of January. In fact, Canada has one of the highest vaccination rates in the world, with 4 out of 5 individuals having completed their vaccination cycle, according to data reported by Johns Hopkins University. Nonetheless, at the federal and provincial level, Canada has implemented some of the strictest Covid-19 measures in the world, with widespread mask requirements and restrictions on the size of gatherings, not only at large events and restaurants but also in private homes.

As far as drivers are concerned, the Government reports an estimated 90% complete vaccination rate. For this reason, Prime Minister Justin Trudeau himself has stated that the protests represent only a "small, marginal minority" of the population. Yet, in early February, hundreds of trucks stood outside parliament for nearly a week in protest, while Ottawa police announced the deployment of additional armed forces and the establishment of concrete barricades to prevent more vehicles from reaching downtown. The reputation of the "Freedom Convoy" has even inspired similar convoys in France, New Zealand and the Netherlands.

In light of the protests, Prime Minister Trudeau resorted to the Emergencies Act, with restraint measures that - he specified - would be "time-limited" in scope, "reasonable and proportionate", and that would not include a deployment of military forces. As a result, and without the need for court orders, banks were able to freeze the personal accounts of anyone connected to the protests, about 210 in total. Insurance on the vehicles of anyone involved in the demonstrations could also be suspended.

The Emergencies Act is a law first passed in 1988 that grants broad powers to the federal government, for a period of time limited to 30 days, to restore order during a crisis. It has never been used before because it is widely regarded as a measure of last resort and has often been called "the most powerful federal law" by some experts because it essentially allows the federal government to take over and temporarily replace other laws already in place. Before invoking these powers, the federal government must determine that the emergency in question "exceeds the capacity or authority of a province to deal with it" or that the situation "seriously threatens" Canada's sovereignty, security and territorial integrity.

In the case of the ongoing protests, the act is invoked to address a public order emergency, giving the cabinet the power to prohibit public assemblies that may "reasonably lead to a breach of the peace," to prohibit travel to, from, or within any specified area, to prohibit the use of "specified property," and to secure "protected places." The cabinet can also direct any person or group of people to "secure essential services" and gives the government the power to regulate the "distribution and availability of essential goods." In the context of the Ottawa protest, Trudeau made explicit how the use of federal powers was intended to prohibit people from gathering illegally in the downtown area and to get tow truck companies in the area to remove trucks used in the protests. Many doubts were expressed about the legitimacy of the use of such measures against perfectly legal protests: the Canadian Civil Liberties Association warned that the move "threatens our democracy and civil liberties".

On February 23, almost a month after the start of the protests, Canada declared the end of the state of emergency, which lasted nine days. Trudeau made it clear that, despite the still strong presence of a threat, the emergency situation could be considered over and the need to use special powers had lapsed. Nevertheless, police checkpoints remained in place throughout the city and a "safe zone" was still maintained around the Canadian Parliament building.

The Canadian protesters aren't just truckers. Here's who has been showing up and what they want - CNN

The federal government has invoked the Emergencies Act. Here's what that means | CBC News

Why Ghana calls upon “Fix the country”.