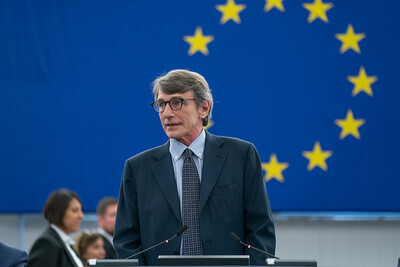 In memory of David Sassoli: from journalism to the European Parliament

David Sassoli, President of the European Parliament since 2019, passed away due to a serious complication to his immune system. Tributes and praise for his work came from politicians on the left and on the right, underlining how much he was loved by both his comrades and his opponents. The first years of his career as a journalist led Sassoli to Rai, later he was elected to the European Parliament, where he held the position of President. Many have mentioned its ability to build bridges, especially for issues relating to the migration emergency. The Italian Prime Minister Mario Draghi called him a "symbol of balance and humanity". The President of the European Commission Ursula von Der Leyen paid tribute to him, defining Sassoli a "great European".

After graduating from the Virgilio classical High School in Rome, Sassoli engaged in the association of political culture called the "White Rose". Sassoli's journalistic vocation began in 1985 when in Paris he interviewed the left-wing terrorist Oreste Scalzone at the Pompidou Center, then documenting a meeting of the latter with the then Minister of Labor Gianni De Michelis: the conversation between the head of the Dicastery and the fugitive then ended up on the pages of Famiglia Cristiana. The scoop earned Sassoli a job in the editorial office of Il Giorno. In 1992 he arrives at Rai as a news correspondent for Tg3, where he deals with the events related to Tangentopoli and collaborating, among other things, with Michele Santoro in the programs Il rosso e il nero and Tempo reale. Fourteen years later he becomes, under the direction of Gianni Riotta, deputy director of Tg1 making himself known and appreciated by millions of Italians.

After having left his journalistic career, in 2009 Sassoli joined Walter Veltroni's new political project, the Democratic Party, and on the proposal of Secretary Franceschini he was a candidate in the elections of June 2009 for the European Parliament (Mep), obtaining over 400,000 preferences and resulting among the most voted in Italy. Three years later Sassoli also tried the race for mayor of Rome, running for the primaries of the Democratic Party: his race at the Campidoglio, however, will not be successful, and Sassoli came behind the future mayor Ignazio Marino but placing himself in front of Paolo Gentiloni, who will become Prime Minister just five years later.

In 2014, dragged by the exploit of Matteo Renzi's Democratic Party, Sassoli was re-elected to the European Parliament and on 1 July of the same year he was appointed vice-president of the Assembly, where he devoted his time to the issues of the Euro-Mediterranean quadrant. During his third term, after the elections in May 2019, he was elected President of the Parliament. During his inauguration speech, he urged the EU to recover the spirit of the founding fathers, to rediscover the values of peace and equality, giving new life to the European project. Last December 16, in his last speech to the European Council, speaking to the Heads of State and Government of the Union, in what can be defined his political testament, Sassoli highlighted the need to carry out a "new project of hope” built around the pillars of innovation, which must also involve institutions and policies, of protection, both of borders and of the common good, and of consolidation and diffusion of the democratic model.

David Sassoli's story was a human and political story inextricably linked to the Democratic Party, but above all to the values of Christian Democracy and democratic Catholicism, environments that Sassoli frequented during his youth. His father was in fact a parishioner of Don Milani and a friend of the "holy mayor" Giorgio La Pira and Nicola Pistelli, "noble Florentine fathers". It is likely that already at this stage the young Sassoli absorbed the ideals of the Ventotene Manifesto, the founding text of the European Union. The close link between the Pontina island and Sassoli was recognized in February 2020 when the Mayor of Ventotene presented Sassoli with the "The Key of Europe" award for his commitment to promoting European reforms and the integration process. He was a politician whose attention to the consolidation of the democratic model has never failed.

The Europea Union becomes a "freedom zone" for the LGBTIQ community

In memory of David Sassoli: from journalism to the European Parliament