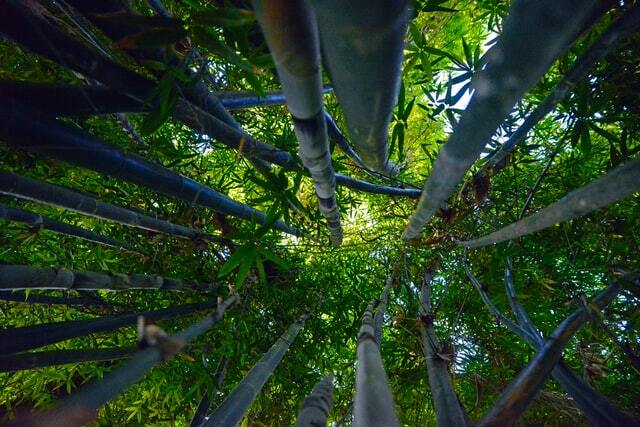 Now, in recent years, we hear more and more about bamboo or bambù.

Bamboo is a fast-growing evergreen plant, with more benefits than disadvantages.

Its cultivation is restricted to tropical and subtropical climate zones, but it is much more widespread in south-eastern Asia, where it also grows spontaneously, thanks to the humid climate. In Europe, in recent years, bamboo cultivation has spread and a lot of start-ups were born, and they have focused on bamboo products, from bikes, to furniture, to textiles.

For millennia, the use of bamboo in the East, mostly in China, India, and Japan, has allowed it to enter the lives and cultures of these peoples.

In China, bamboo is a long-life symbol, in India is a friendship symbol, while in Japan is synonym of purity and innocence. Around many monasteries we find bamboo forests because it is a proper symbol of protection from evil. In some cultures, this plant symbolizes the birth of man and woman. And for many people, even today, it is a salvation from poverty and a great resource of life.

But why is bamboo more sustainable than other wood, traditionally used in occident?

If we analyze the most used wood in Italy, the oak, we can say that it takes 80 years to grow again for a plant. Instead, in the case of bamboo, it takes only 5 years. Let's also consider the fact that bamboo needs little space to grow, in fact, the canes grow very close together, so much so that it can be defined as a weed, it is obvious its advantage in terms of costs, space and saving of resources. With the use of this plant, it would be possible to contain deforestation, which is a real scourge for our planet.

Being a very resistant plant, it does not need peculiar treatments with pesticides and cares, compared to other plants, always in the advantage of man and environment. This plant is also used to fight desertification, such as in Ethiopia in recent years.

Bamboo is fundamental for the diet of the giant panda that feeds almost exclusively on reeds, buds, and leaves.

The unfavorable point that can be perceived as such in Europe, is the transportation. In fact, the costs to transport it from Asia to Europe are very high, in addition to the pollution involved.

Today we are careful to buy sustainable materials products, but we also need to evaluate the quality and durability of these products. Well, bamboo is a very durable and very stable material, and you can use it for a wide variety of creations. It is becoming a very important material for green building. In fact, bamboo is called "vegetable steel" because it has same characteristics in terms of hardness, with a compressive strength twice that of concrete. These characteristics make this material very suitable for the realization of vertical support elements, such as columns and pillars.

We also find bamboo very popular in home furnishings. Many pieces of furniture made of bamboo have an ethnic style, but the contemporary construction techniques allow the realization of furniture and accessories with any design and not only with the classic cane weave.

I end my article with a written thought of ex-Indian prime minister, Atal Bijari Vajapayee, in which he explains bamboo value for many people in Southeast Asia.

«Bamboo’s plant is green gold of poor man: a person can sit in a bamboo home, under a bamboo roof, on a chair and table, both made of bamboo, with a bamboo cap on his/her head and with bamboo sandals. At the same time, he can hold a bamboo bowl in one hand, in the other bamboo chopsticks he needs to eat bamboo shoots. After having eaten his lunch, cooked in a fire fueled by burning bamboo, the table could be wiped with a cloth made of bamboo fibers, he could cool off with a bamboo fan, take a siesta in a bed on a mattress and pillow all made of bamboo. When he wakes up, he could smoke in a bamboo pipe and write with a bamboo pen on bamboo paper, and then carry his articles to the newspaper in bamboo baskets suspended on a bamboo pole, with a bamboo umbrella on his head. He could cross a suspension bridge built exclusively from bamboo, drink water from a bamboo pipe, and dry his face with a handkerchief, made from bamboo fibers.»